The most likely cause is that the generator output is not configured with the correct value that matches the actual load.

Function generators like the SIGLENT SDG series are designed to have an output impedance of 50 ohms. This output impedance is assumed to be in series with a known load impedance R2, as shown in Figure 1 below: 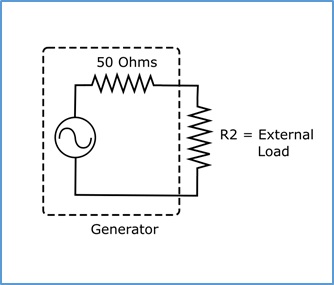 Most generators do not have a measurement function. That is, the user can set the amplitude of the output waveform, but the instrument has no way of verifying that the true output matches this set value. We recommend checking the waveform using an oscilloscope or DMM, both of which are usually high impedance (1 MOhm or greater) inputs.

If the generator is set to 50 ohms, but the load is a high impedance, then the majority of the voltage drop is across the external load and the set amplitude will be roughly half of the measured voltage on the measurement instrument. Be sure that the output load setting on the generator matches the external load for the most accurate output amplitude.