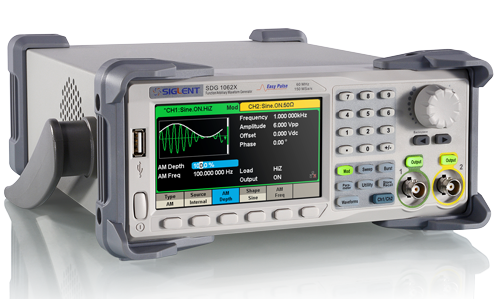 SIGLENT’s SDG1000X dual-channel arbitrary waveform generators include up to 60 MHz maximum bandwidth, 150 MSa/s sampling rate and 14-bit vertical resolution. The proprietary EasyPulse & TrueArb technique helps to solve the weaknesses inherent in traditional DDS generators when generating pulse waveforms, and the special square generator is capable of generating square waveforms up to 60 MHz in frequency with low jitter. With these advantages, SDG1000X function generators can provide users with a variety of high fidelity/low jitter signals while meeting the growing requirements of a wide range of complex and varied applications.

With SIGLENT’s TrueArb technology, the SDG1000X signal generator retains the advantages of DDS technology while overcoming the serious weaknesses of DDS jitter and distortion. TrueArb technology generates arbitrary waveform in a point-by-point fashion, every data point is used to generate the output signal which has been stored in memory. Data points will not missed or repeated and arbitrary waveforms possess very low jitter (< 150ps).

Capable of outputting large signals at high frequencies. Dual-channels, 20 Vpp amplitude can be guaranteed at up to 10 MHz.

With 0 dBm output, the THD (Total Harmonic Distortion) is less than 0.075%. Harmonics and spurs are less than -40 dBc throughout the entire bandwidth.

When a Pulse waveform is generated by a common DDS generator, there will be a one-clock-jitter if the sampling rate is not an integer-related multiple of the output frequency. SDG1000X EasyPulse technology successfully overcomes this weakness in DDS designs and helps to produce low jitter Pulse waveforms.

Benefitting from a special square-wave generating circuitry, the Square from the Siglent’s SDG1000X breaks the 60 MHz bandwidth barrier, reaching rise/fall times of less than 4.2 ns, and frequencies up to 60 MHz.

The Square wave exhibits the same excellent jitter performance as the Pulse waveform.

For arbitrary waveforms, TrueArb not only has all the advantages of traditional DDS, but also eliminates the probability that DDS may cause serious jitter and distortion.

TrueArb generates arbitrary waveforms point by point, never skips any point so that it can reconstruct all the details of the waveform as defned.

As with EasyPulse, TrueArb effectively overcomes the defect that DDS may cause the one-clock-jitter in arbitrary waveforms.

Multiple modulation types: AM, DSB-AM, FM, PM, FSK, ASK, PSK and PWM. The modulation source can be configured as “Internal” or “External”.

Two Burst modes, “N cycle” and “Gated”. The Burst source can be configured as “Internal”, “External” or “Manual”.

Two Sweep modes, “Linear” and “Log”. Two Sweep directions, “Up” and “Down” and three Sweep sources, “Internal”, “External” and “Manual”.

Up to 16 harmonics may be generated. Amplitude and phase of each harmonic can be set independently 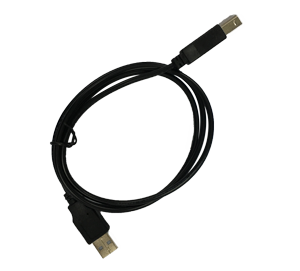 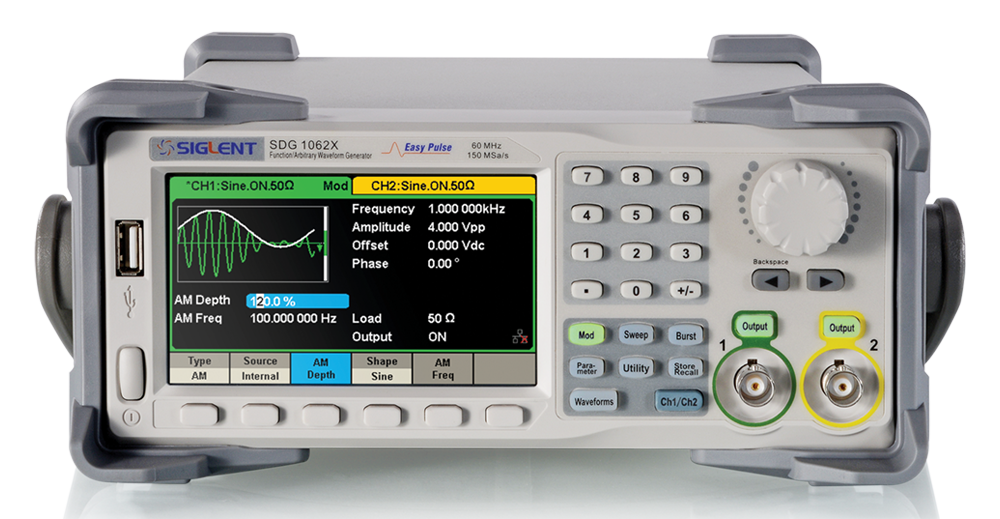 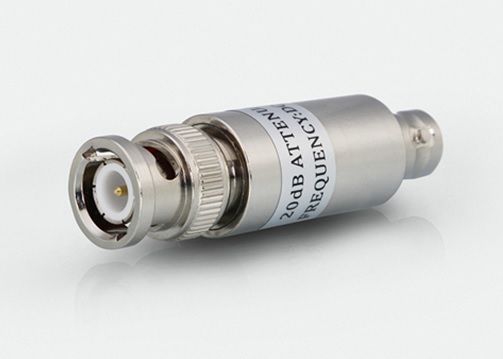 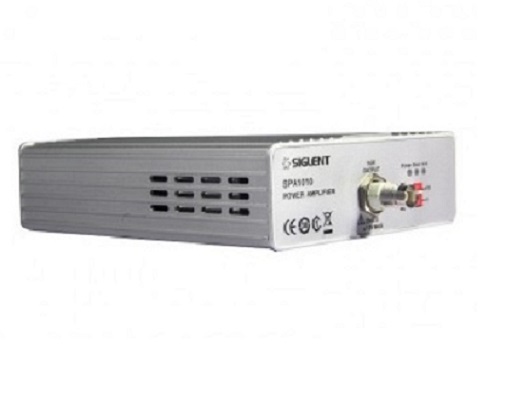 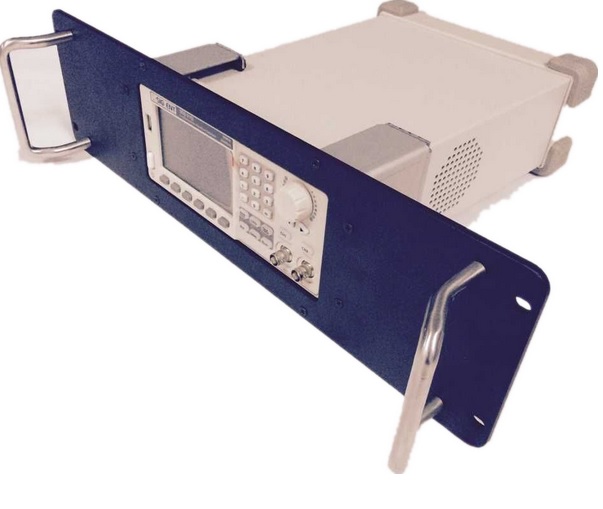 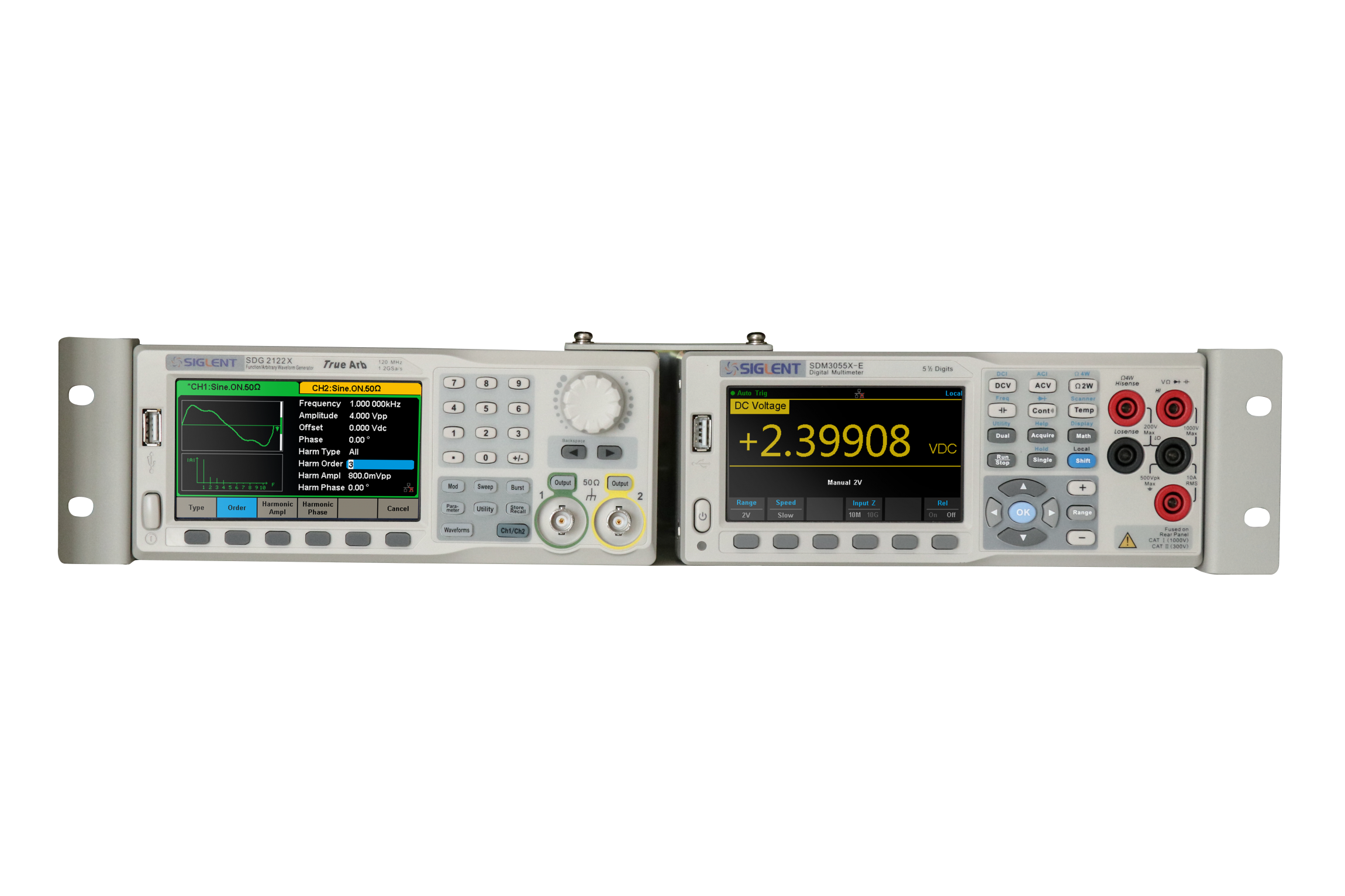 Answers to questions about our products, troubleshooting and other useful information.

Download PDF Preface As can be seen in the data sheet for Siglent’s SDG2000X arbitrary waveform generator series, the sampling rate specification (1.2 GSa/s) is followed by a note of “4X Interpolation”. This may be confusing to some customers, even some experienced users of function generators. This white paper is intended to explain this specification … Continued
Download PDF A resolver is an electromagnetic sensor that is used to determine the mechanical angle and velocity of a shaft or axle. They are often used in automotive applications (cam/crankshaft position), aeronautics (flap position), as well as servos and industrial applications. When designing, testing, or troubleshooting systems that use resolvers, it can be worthwhile … Continued
Download PDF Automating a test can dramatically increase the productivity, throughput, and accuracy of a process. Automating a setup involves connecting a computer to the test instrumentation using a standard communications bus like USB or LAN and then utilizing code entered via a software layer (like LabVIEW, .NET, Python, etc..) to sequence the specific instrument … Continued
View More Application Notes